Ayutthaya is often called the Venice of the East because of the many architectural splendors that can be seen throughout the city. Founded in the early 14th century because of people fleeing to avoid a smallpox epidemic, the city at one point was one of the largest on the planet during its time period. In the 18th century, however, much of the initial city of the time was destroyed by the Burmese Army, resulting in the collapse of the ruling empire. Today the Ayutthaya ruins are classified as a World Heritage Site, while visiting the many religious sites of Ayutthaya can take up an entire holiday in Thailand. 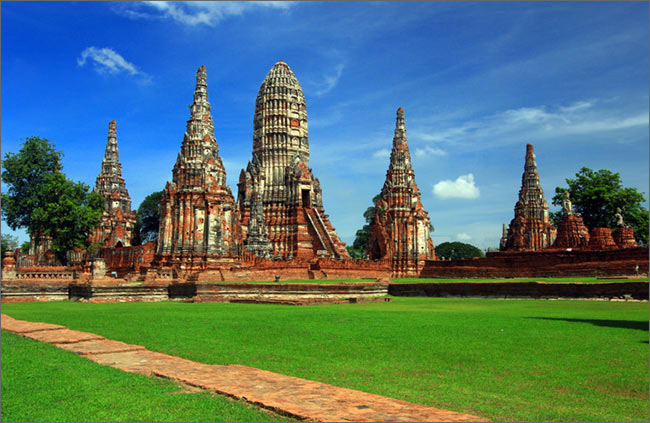 The major attraction of Ayutthaya is the UNESCO world heritage historical park where the Ruins of Ayutthaya is located. There are numerous temples in Ayutthaya that attract people around the world who are interested in ancient temples and historical places. The Bang Pa-in palace is another important tourist destination. A boat trip from Bangkok to Ayutthaya will be a memorable journey.

Ruins and Temples of Ayutthaya

Many visitors to Ayutthaya make it a practice to visit the various religious sites throughout the city. Many pagodas and spires can be seen on a walking tour, especially through the ancient capital, but there are also modern places of reflection and worship throughout the city. Here are the best places to visit on your trip:

Wat Chaiwatthanaram: Built on the banks of the Chao Phraya River, this Buddhist temple is perhaps the most well known temple in the city. It hosts thousands of visitors every year and is a popular tourist location, so plan your trip here accordingly. Constructed in 1630, its initial purpose was to commemorate the king’s mother and her former residence in the area. There are 8 chapels to explore, over 120 Buddha statues to seek out, and many hidden entrances that are fun to find.

Wat Phanan Choeng: Thought to have been built in 1324, which pre-dates the city of Ayutthaya, the ornate nature of this Buddhist temple is what will strike you first.

Most famous is the statue of Luang Pho Tho, a 19 foot Buddha statue that is believed to be a guardian beacon for mariners. It is thought that at one point, this temple also housed up to 200 refugees who were fleeing persecution from China in the early days of the temple. Many gifts were bestowed to this temple from the Chinese admiral Zheng Hehich, makes it a popular trip for those of Thai-Chinese ancestry. If you are a Buddhist make sure that you visit Wat Phanan Choeng temple when you are Ayutthaya.

Wat Ratchaburana: Located in the island section of Ayutthaya, the prang of this Buddhist temple is considered to be the best in all of the city. Built by the ruling king in 1424, the temple itself is constructed above the cremation site of the king’s two brothers. The brothers had fought to the death in a duel to take over the kingdom. Many rare images of Buddha and the culture have been discovered inside this temple, though many were stolen before they could be properly recovered. Today the artifacts can be viewed at the Chao Sam Phraya Museum, which is nearby.

Is a Visit To Ayutthaya In Your Future?

Though the emphasis of a visit to Ayutthaya is often on the temples, there are plenty of other attractions that make this city a wonderful place to take a holiday. If you’re looking for a unique trip to the historical place that is filled with adventure, then you should consider taking a trip to this beautiful city. Book your trip today to Ayutthaya and experience Thailand like never before.